Biologics or recombinant protein drugs, such as therapeutic antibodies and recombinant hormones and enzymes, require an expression system for their production. As a result, manufacturing and purification require continuous monitoring of process sterility and tight microbial control strategies. In order to obtain a sterile and patient-safe biologic drug, the manufacturing process must ensure that the final product is free from intrinsic impurities (upstream) and extrinsic contaminants (downstream). These include:

What are Endotoxins in Biologic drugs?

Endotoxins are amphiphilic lipopolysaccharides (LPS) located in the outer cell membrane of gram-negative bacteria. Endotoxins are categorized as pyrogens (fever inducing foreign substances) since they trigger TLR response, leading to inflammation, fever, and sometimes shock and organ failure. Hence, pyrogenic contamination of biological drugs and the excipients used to formulate them are a concern for biologics manufacturers.  At the time of submission of an investigational new drug (IND) or biologics license application (BLA), it is important to include controls on pyrogens, including endotoxins, as a part of the chemistry, manufacturing, and control information.

It is always better to design manufacturing processes that produce endotoxin-free end products, rather than include steps later on to remove endotoxins in the final product. From an FDA perspective, in order to implement Quality by Design manufacturing concepts, the endotoxins testing strategies must be tailored depending upon the specific biologic product and process development. Additionally, appropriate risk management steps are required to assure consistent final product quality. Suitable in-process testing methods should be employed to monitor the production process areas that pose a risk of endotoxins contamination.

Conventionally, the bacterial endotoxins test (BET) and the rabbit pyrogen test (RPT) have been used to detect endotoxin levels during biologic drug development.

In general, endotoxin acceptance criteria are set such that the endotoxin administration level does not exceed the pyrogenic threshold. Thus, the mode of administration is also an important determinative factor. In the case of intravenous and subcutaneous administration, the upper limit is set at 5 EU/Kg/hour or 100 EU/m2/hour. And for intrathecal, the threshold is set at 0.2 EU/kg/hour. These values denote the maximum combined endotoxin exposure level from all agents (including concomitantly administered drugs), provided there is no clinically significant increase in body temperature at these exposures. For lyophilized drugs, the endotoxin contribution from the diluent or reconstitution fluid is to be considered while setting the acceptance threshold.

Importantly, for the development of combination therapies, the combined endotoxin levels of all drugs must be evaluated. Combination therapy involves the administration of two or more biologics to obtain a synergistic clinical effect. Most of these drugs are originally designed as monotherapies, therefore the individual impurity levels and mode of administration must be taken into consideration. In the case where EU exceeds the recommended levels, phase-wise drug administration could be an alternative treatment option. 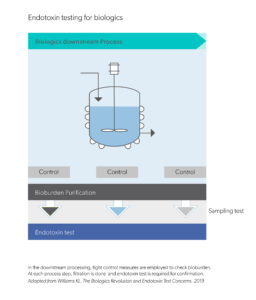 Original commercial drugs contain tested and approved endotoxin levels, therefore they can be used as reference standards for R&D purposes. If you need clinical-grade molecules for your early drug development programs, our drug aliquots are the perfect fit for you. Your advantages are:

Browse our portfolio of clinical-grade molecules