Excipients: The inactive ingredients of biologics!

What are excipients for biologics?

The advent of biologics (peptides, proteins, monoclonal antibodies and vaccines) has revolutionized the therapeutic industry. But, since biologics are synthesized from or by living organisms, it is inherently unstable leading to their degradation by several physical and chemical factors. To overcome this major challenge, excipients or additives play an important role in the stabilization of biologics during its processing and storage.

An excipient is defined as a pharmacologically inert substance by itself, but when used in combination with an active component, it can provide several benefits. Usage of an excipient to aid the development of novel therapies and robust biologics depends on factors such as type of active pharmaceutical ingredient (API), route of administration, dosage form, target population, indications, regulatory requirements in the respective markets, availability of highly pure excipients and also price and availability from suppliers. The selection of excipients depends on the different functional characteristics and requirements, so as to

Currently, most of the biologics available in the market are formulated in liquid or aqueous form. However, it is well-known that solidifying biologics has several advantages apropos to stability and storage. Lyophilization or freeze-drying is often employed to improve the long-term storage stability and ease of aseptic handling and shipping. But, lyophilization poses certain manufacturing challenges as the process is expensive and time-consuming. Depending on the type of formulation (liquid or solid), the excipients are chosen. 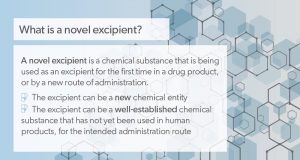 Buffers are weak conjugate acid-base pairs. Buffers are added to stabilize the pH of solutions that are used for the manufacturing of biologics. Furthermore, during the downstream processing of biologics, buffers are required to equilibrate, condition, wash, elute, or concentrate the product in the purification steps. Moreover, buffers are exploited in product isolation and purification steps to help protein capture and polishing and also to remove viruses or for depyrogenation in the filtration process. Buffers are also used to clean and disinfect downstream processing equipment, such as chromatography matrices and membrane filtration systems. Some of the commonly used buffers are acetate, succinate, citrate, histidine, phosphate and tris.

Sugars (mono/di/poly-saccharides such as sucrose, trehalose, maltose and lactose) and polyols (such as mannitol, sorbitol, and glycerol) are widely used as stabilizers, osmolytes/tonicity agents and bulking agents in both solid and liquid formulations of biologics.

Sugars and polyols are known to provide thermodynamic stability to the native folded state of proteins and prevent protein fibrillation. In the case of therapeutic antibodies, sugars provide a stabilization effect by varying mechanisms, including

The stabilizing effect of polyols has also been well studied in the case of aqueous solutions of proteins. In fact, the stabilization effect is pH-dependent and concentration-dependent, specific to each type of polyol, which increases as a function of size. Moreover, a sugar:protein w/w ratio of at least 1:1 is generally observed in the majority of the formulations. In the case of subcutaneous injections, sugars additionally function as osmolality regulators, formulated at ~300 mOsm/kg to prevent pain.

When it comes to lyophilized biologic formulations, high purity disaccharide excipients (eg. sucrose and trehalose) are used extensively in several commercialized biologic drugs. They function as a cryoprotectant, as well as lyoprotectant to protect the API from freezing and dryness related stresses. Additionally, sugars and polyols also function as bulking agents in order to maintain the integrity of the solid form. Glass transition temperature (Tg) of the disaccharide is an important parameter to be considered during freeze-drying since it dictates the stability and shelf life of the final product.

However, for mAb formulations, it is best to avoid reducing sugars (monosaccharides and most disaccharides including glucose, lactose, fructose, maltose, and maltodextrins) as these excipients can degrade and deactivate immunoglobulin proteins by Maillard reaction under storage conditions.

Amino acids are employed as stabilizing agents and osmolytes, and unlike sugars, they are not pH-dependent. The most commonly used amino acids in biologic formulations are glycine, histidine and arginine, in the order of frequency. These are basic or positively charged amino acids and are of particular interest in antibody-drug formulations. Studies demonstrate that positive-charged amino acids can bind transiently to the immunoglobulin side-chains and alter water population in the solvent shell, thereby improving solubility and suppressing protein unfolding and aggregation.

Glycine is an important excipient in lyophilized biologics that serve as a buffering and bulking agent. It acts as a crystallizing solute and stabilizing agent to prevent protein inactivation during the freeze-drying process. Interestingly, it has been reported that glycine is preferred to sucrose in the formulation to avoid renal implications, as exemplified in the case of Cuvitru (Baxalta US Inc.). Histidine, on the other hand, may not be the best choice when it comes to enhancing solubility, but it can modify hydrophobic interactions and help reduce protein viscosity. Arginine has also been gaining popularity in mAb formulations as an important choice to improve solubility without affecting protein stability.

Surface-active agents (e.g. Surfactants) help to inhibit adsorption, denaturation and/or aggregation of proteins at interfaces (both air-water and solid-water) and affect stability through differential binding to native or denatured states of the protein. The use of surfactants such as Polysorbate 20, Polysorbate 80, and Pluronic F68 has shown to decrease both soluble and insoluble aggregates. 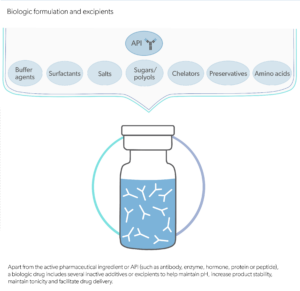 Salts, mainly sodium chloride, are often used as a tonicity agent to maintain the osmotic pressure gradient during injections. Sodium chloride increases the ionic strength of solutions while minimizing electrostatic interactions between protein molecules. As a result, the addition of salt can also help maintain pH, and enhance the protein solubility to an extent, a phenomenon termed ‘salting in’. However, the salt concentration needs to be thoroughly investigated for each API as it may affect conformational stability.

Antioxidants (examples, Histamine, methionine, ascorbic acid, glutathione, vitamin E, polyethylenimine) and chelator preservative agents (examples, edetate disodium, diethylenetriamine penta-acetic acid, citric acid, hexaphosphate, thioglycolic acid, zinc) are added to limit oxidation reactions and maintain the stability and safety of biologics. Some of the approved antimicrobial agents include benzyl alcohol, metacresol, phenol, 2-phenoxyethanolare. These substances are particularly important in multidose formulations where frequent opening and closing of drug vial can lead to microbial contamination. However, certain preservatives such as Metacresol, phenol and zinc can cause allergic reactions and need to be considered while formulating and determining the route of administration.
As the biologics market has been rapidly expanding, the list of excipients and an understanding of their chemistry and biological effects have been growing too. In November 2019, the US FDA to release a draft document outlining best practices in drug and biological product postmarket safety surveillance (reference 4).

Evidentic sources aliquots of clinical-grade molecules of commercially approved drugs. The aliquots contain the original formulation of the commercial product, including the original API as well as the original excipients (the buffer and concentration are the same as those of the original drug).

They are sold in a small and convenient aliquot format that will provide you: