Therapeutic antibodies for cancer targeting CD20 have been successfully used in immunotherapies to treat B-cell malignancies and auto-immune diseases.

Human CD20 (cluster of differentiation 20) is a cell surface marker uniquely expressed on B-cells, right from the pro-B-cell stage through memory B-cells.

CD20 has no known ligands and its biological function still remains largely unclear. Several in-vitro studies suggest its role in B-cell receptor (BCR) signaling and its function as a calcium channel via homo-tetramerization, impacting B-cell activation, differentiation, and proliferation. However, despite the obscurity regarding the molecular function, CD20 is a biomarker of great clinical significance especiallly when used with therapeutic antibodies for cancer targeting..

The high expression levels and expression pattern of CD20 make it a near-ideal choice as an antigen for a direct therapeutic target. Since CD20 is absent on precursor hematopoietic stem cells and plasma cells, the potential for off-target toxicity is minimal. And more importantly, the B-cell depletion treatment is able to retain the humoral protection against previously encountered pathogens and allows repopulation of the B-cell compartment after treatment. Therefore, targeting CD20 with therapeutic antibodies to treat cancer has been one of the most successful immunotherapeutic strategies employed in:

The first anti-CD20 therapeutic antibody to be approved was Rituximab, for the treatment of NHL in the year 1997, and later on was approved for the treatment of other indications, including CLL, RA, granulomatosis with polyangiitis (GPA), and microscopic polyangiitis. But being a human-murine chimeric antibody, patients often develop anti-drug antibodies (ADAs) to Rituximab, which significantly affect its efficacy and tolerability. To overcome the concerns of immunogenicity and drug-resistance, subsequent generations of humanized and fully human anti-CD20 therapeutic monoclonal antibodies (mAbs) were developed (Table). The mechanisms of action (MOA) of these antibodies involve Fab-mediated and Fc-mediated effects on the targeted cells. All the currently approved anti-CD20 therapeutic antibodies are of the isotype IgG1 and most of them target the larger extracellular loop of CD20 protein. However, they are categorized into type I and type II based on their differences in ligand-binding mechanisms, which dictate their biological effector functions. 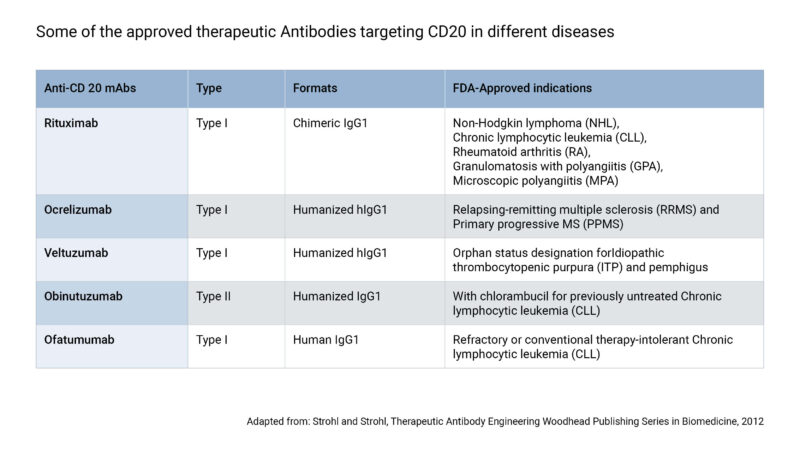 The binding of type I anti-CD20 mAbs leads to the formation of CD20 lipid rafts on the plasma membrane. This allows for binding of a higher number of antibodies to a single cell, that in turn induces more potent effector functions. X-ray crystallography and cryo–electron microscopy studies have made it possible to examine the 3D structures and differences in binding mechanisms between the two types. Type I antibodies show the ability to form “seeding complexes” resulting in concatenation of IgG:CD20 molecules (2:2 arrangement where CD20 dimer binds to 2 IgG) on the plasma membrane (Figure A). This promotes Fc clustering, which explains the higher degree of complement-dependant cytotoxicity (CDC). But, higher Fc clustering also means higher susceptibility to internalization and lysosomal degradation, that could hamper the clinical efficacy.

The first generation of CD20 therapeutic antibody includes the type I Rituximab (Genentech/Roche), which is a human-murine chimeric mAb that is still widely used for cancer and auto-immune diseases. Rituximab has truly revolutionized the field of mAb therapeutics as it was the first successful immunotherapeutic mAb drug to be approved for oncology. The addition of Rituximab in the treatment regimen along with chemotherapy has significantly increased overall survival rates of patients with B-cell malignancies. In-vitro thermodynamic analysis reveal a slower dissociation rate and higher opsonization rate for Rituximab contributing to its stability and efficacy. Apart from CDC, in-vitro assays and genetic-association studies suggest that Fcγ receptor (FcγR)-mediated ADCC (antibody-dependent cell cytotoxicity involving NK cells) and ADCP (antibody-dependent cell phagocytosis involving macrophages) are also important MOAs for Rituximab. Moreover, the high probability of internalization can reduce the cell surface levels of CD20, which could be one of the reasons contributing to Rituximab-resistance.

The second generation of type I unconjugated anti-CD20 therapeutic antibodies that are approved include Ofatumumab (Genmab/GlaxoSmithKline) and Ocrelizumab (Genentech/Roche). Ofatumumab, a fully human mAb, has been approved for CLL as it has shown in-vitro activity against Rituximab-resistant CLL cells, even at low CD20 expression levels. Compared to Rituximab, Ofatumumab binds closer to the B-cell plasma membrane, to an epitope spanning both the extracellular loops of CD20, resulting to an increased CDC. On the other hand, Ocrelizumab is a humanized mAb approved by FDA and EMA for multiple sclerosis. It shows an improved binding affinity to the low-affinity variants of the FcγRIIIa, thereby exhibiting a higher ADCC but lower CDC when compared to Rituximab.

Unlike type I, type II mAbs against CD20 causes no redistribution of CD20 within the plasma membrane into lipid rafts. This lack of redistribution attributes to a lower extent of complement activation, compared to type I mAbs. However, evidence from experiments conducted in B-cell lines as well as primary B-CLL cells indicates that type II antibodies cause a greater degree of directly induced, non-apoptotic cell death upon binding to target cells. Interestingly, studies show that type I and II mAbs bind an extremely similar epitope on the same loop of CD20 and it is plausible that only the orientation of binding differs between these mAbs but this has a significant effect on their activity. X-ray crystallography structures and tomography analysis show type II antibodies bind across the CD20 tetramer in a 1:2 fashion (one IgG binds to two CD20s) forming “terminal complexes”, thus preventing the binding of further mAbs (Figure B).

In order to address the requirement for new therapeutics along with increased efficacy, Obinutuzumab (Roche), a novel type II humanized CD20 mAb, was glycoengineered to treat patients with lymphocytic leukemia and lymphomas of B-cell origin. Obinutuzumab also qualified as the first FDA approved therapeutic antibody drug to receive a breakthrough therapy designation to treat the antecedently untreated CLL. Compared to Rituximab, Obinutuzumab induces stronger direct cell death and ADCC, thereby exhibiting superior activity in whole-blood B-cell depletion assays, in preclinical human lymphoma xenograft models, and in depleting B cells in nonhuman primates. This could be attributed to the strong homotypic adhesion and actin-dependent lysosome-mediated cell death produced by Obinutuzumab. Also, the enhanced FcγRIII binding, along with binding to CD20 in a different orientation at a wider elbow angle than type I mAb may be accountable for the different biologic characteristics. Obinutuzumab  therapeutic antibodies are designed for cancer targeting CD20. 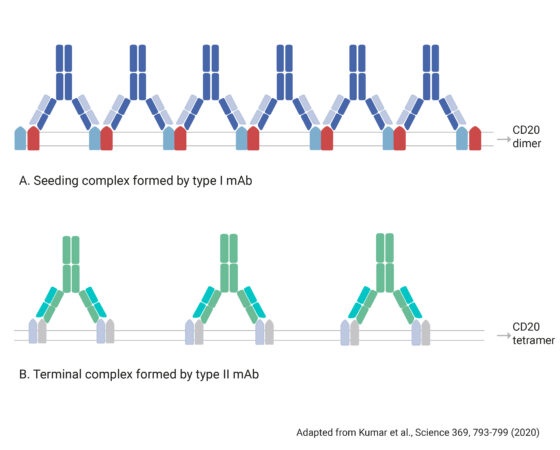 The revolutionary and significant role of these therapeutic mAbs in modern immunotherapeutics is certainly unchallenged. The complete potentiality of CD20 mAbs is assured to be utilized and developed in the imminent future. Moreover, the different generations of anti-CD20 therapeutic mAbs have contributed enormously to our current knowledge of therapeutic mAb MOAs and the parameters for an effective therapeutic target and mAb. Especially, the success and shortcomings of Rituximab make it an important reference drug for the upcoming generations of engineered therapeutic antibodies. Another important therapeutic strategy is the use of CD20 mAbs in combination therapy along with other mAbs and small molecules drugs to overcome drug resistance and improve clinical outcomes. For example, TLR-9 agonist (1018 ISS) in combination with Rituximab in follicular lymphoma exhibited tumor infiltration of CD8+ T cells and macrophages. Other recently developed immunomodulatory molecules such as STING (stimulator of interferon genes) agonists along with anti-CD20 mAbs have demonstrated enhanced therapeutic effects in pre-clinical studies. An alternative advanced approach is the use of bispecific antibodies (bsAb) for B-cell malignancies that are refractory to conventional therapy. Studies have exemplified anti-CD20/CD22 bsAb to have shown better anti-tumor activity than the combined parental antibodies in-vivo. Similarly, CD20(2) × FcγRIIIA tribody, is observed to augment engagement of the target cell with effector cells. Hence, new and improvised generations of anti-CD20 therapeutic antibodies against many diseases are being engineered and trialed so as to increase the clinical efficacy and safety. Also, unraveling the enigma of CD20 physiology and MOA of the mAbs will help find a gamut of applications of targeting this antigen and help evoke the spirit brought about by Rituximab’s emergence, now over twenty years ago. Furthermore, as a promising solution to the high cost and for establishing therapeutic equivalence, the production of biosimilars of CD20 mAbs are being considered as the patent expiration approaches for several drugs. Evidentic qualifies to cater aliquots of both type I and type II anti-CD20 therapeutic antibodies against cancer that can be utilized as reference drugs for quality characterization and development of next-generation anti-CD20 immunotherapies and biosimilars. Check out all the reference drugs from Evidentic here. 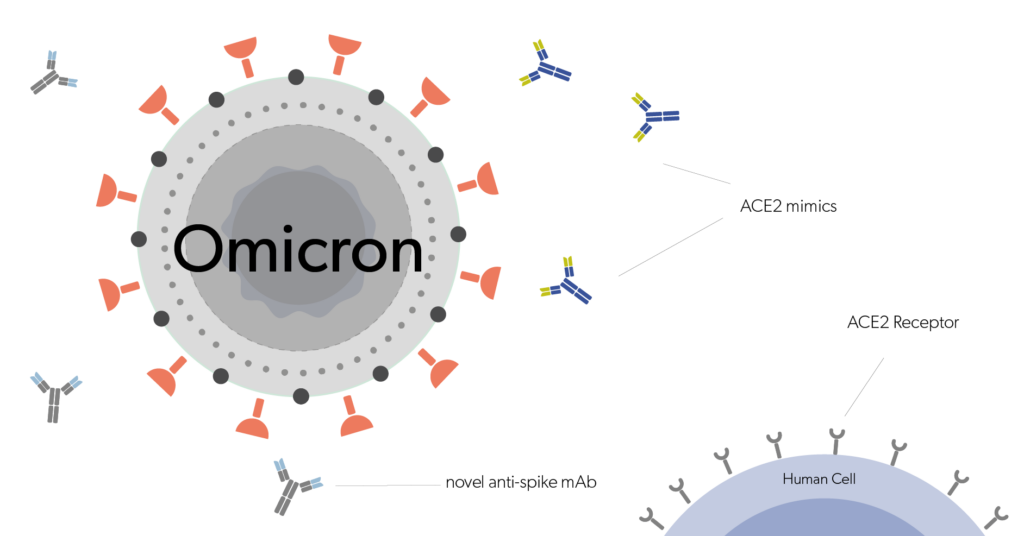